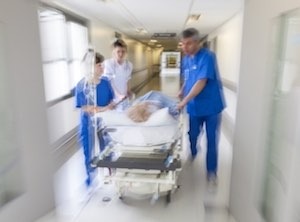 One of the biggest risk factors for overdose death from opioids is having had a previous overdose. Common sense and a growing body of research suggest that patients with opioid use disorder (OUD) who receive acute care in an emergency department will be at reduced risk for later overdose if they are initiated on medications to treat their OUD. Unfortunately, too few emergency departments (EDs) are making this a standard practice, and lives are being lost as a result.

According to a new report published by the Delaware Drug Overdose Fatality Review Commission, half of the people in the state who died of an overdose in the second half of 2018 had suffered a previous nonfatal overdose, and more than half (52%) of the overdose deaths occurred within 3 months of a visit to the emergency room. Even when visits were not for overdose, signs of OUD were apparent during the visit in most cases. The report thus recommended that patients who visit emergency rooms with obvious signs of OUD should be linked to treatment. Optimally, the initiation of medication for OUD should be started before patients are discharged, as this will improve their clinical outcomes.

Even without a waiver, ED providers are permitted to administer buprenorphine or methadone a limited number of times to patients under their care, and several studies have now shown the benefit of initiating buprenorphine in the emergency department rather than just referring to treatment. For example, a NIDA-funded study by Yale researchers published in JAMA in 2015 showed that ED­–initiated buprenorphine was associated with decreased opioid use and improved treatment engagement in the 30 days following discharge.

There is significant evidence that medications for OUD prevent overdoses. For example, a prospective cohort study of 17,568 opioid overdose survivors in Massachusetts published last year in Annals of Internal Medicine found significant reductions in risk of subsequent overdose over the next 12 months in those who received treatment with methadone or buprenorphine. Yet, only 30 percent of those who had overdosed received medication for OUD. The latter statistic is alarming, because this sample was clearly at high risk for overdosing. Even more alarmingly, 34 percent of those who had been treated for overdose received opioid pain prescriptions during the subsequent 12 months, despite their overdose history, and 26 percent received benzodiazepines, which as respiratory depressants further increase risk of overdose in those who misuse opioid drugs or who are being treated with high doses of opioid medications for pain management.

It is crucial that acute care physicians, and the health care systems in which they practice, become aware of the importance of ensuring that patients are screened for OUD and, if OUD is detected, that they receive OUD treatment, ideally by initiating them on buprenorphine before they are released.  Additionally, patients who visit an ED because of overdoses or who otherwise show signs of OUD should be sent home with naloxone and given instructions on how to use it to reverse an opioid-induced overdose. This was another recommendation of the Delaware report. Four out of five fatal overdoses reviewed by the state commission occurred in a residence, and naloxone was unavailable in most (93%) of the cases. Abundant research has shown the life-saving benefits of distributing naloxone not only to people who are addicted to opioids or misusing them but also to pain patients being treated with high doses of opioid medications and their families and friends.

Making EDs more responsive to the opioid epidemic often means educating colleagues and changing hospital culture. Many emergency physicians do not feel adequately prepared to refer or treat with buprenorphine, and often there are real or perceived logistical impediments like obtaining prior authorization from insurers. Emergency physicians should be encouraged to complete the training necessary to get waivered to prescribe buprenorphine, which greatly enhances their confidence and ability to respond to patients with OUD.

Healthcare is not yet doing enough to avail itself of a valuable lever in the opioid crisis: using visits to emergency rooms to get patients with OUD on medication and provide them with naloxone. Intervening in these simple ways would greatly help reduce the shocking numbers of deaths from opioids in this country.

For all the funding paid to the NIDA, this is something that should have been addressed and corrected FIFTEEN YEARS ago.
The actions of the NIDA, in the face of an epidemic of death: Too Little, too late.

I am all for helping people get on the path to recovery. Starting OD victims on MAT is a great start, but there is only so much an ER can do. What efforts are being made to effectively communicate with the discharged that they have support and options? The numbers I have seen are that a majority of those seen in the ER refuse the help of both social workers and peer counselors

Rates of follow-up and care

Rates of follow-up and care engagement for people treated for opioid overdose in emergency departments are variable, and best practices are still being worked out. This recent article is a review of post-overdose intervention models implemented in the US and described in peer-reviewed literature. NIDAMED also provides resources for clinicians on how to motivate patients to seek care following opioid overdose.

It is imperative that a staff person or volunteer be available to initiate a soft intervention and conduct a follow-up with the patient's consent. Have a pocket card of the numbers to call and if the person is accompanied by someone request to give the companion information too. Be clear that no police will be contacted.