Connections between Sleep and Substance Use Disorders

Most common mental disorders, from depression and anxiety to PTSD, are associated with disturbed sleep, and substance use disorders are no exception. The relationship may be complex and bidirectional: Substance use causes sleep problems; but insomnia and insufficient sleep may also be a factor raising the risk of drug use and addiction. Recognizing the importance of this once-overlooked factor, addiction researchers are paying increased attention to sleep and sleep disturbances, and even thinking about ways to target sleep disruption in substance use disorder treatment and prevention. 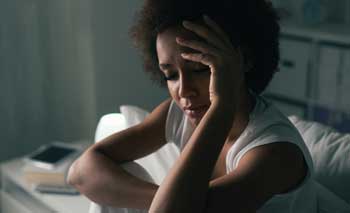 We now know that most kinds of substance use acutely disrupt sleep-regulatory systems in the brain, affecting the time it takes to fall asleep (latency), duration of sleep, and sleep quality. People who use drugs also experience insomnia during withdrawal, which fuels drug cravings and can be a major factor leading to relapse. Additionally, because of the central role of sleep in consolidating new memories, poor quality sleep may make it harder to learn new coping and self-regulation skills necessary for recovery.

The neurobiological mechanisms linking many forms of drug use and sleep disturbances are increasingly well understood. Dopamine is a neurochemical crucial for understanding the relationship between substance use disorders and sleep, for example. Drugs’ direct or indirect stimulation of dopamine reward pathways accounts for their addictive properties; but dopamine also modulates alertness and is implicated in the sleep-wake cycle. Dopaminergic drugs are used to treat disorders of alertness and arousal such as narcolepsy. Cocaine and amphetamine-like drugs (such as methamphetamine) are among the most potent dopamine-increasing drugs, and their repeated misuse can lead to severe sleep deprivation. Sleep deprivation in turn downregulates dopamine receptors, which makes people more impulsive and vulnerable to drug taking.

In addition to their effects on dopamine, drugs also affect sleep through their main pharmacological targets. For instance, marijuana interacts with the body’s endocannabinoid system by binding to cannabinoid receptors; this system is involved in regulating the sleep-wake cycle (among many other roles). Trouble sleeping is a very common symptom of marijuana withdrawal, reported by over 40 percent of those trying to quit the drug; and sleep difficulty is reported as the most distressing symptom. (Nightmares and strange dreams are also reported.) One in ten individuals who relapsed to cannabis use cited sleep difficulty as the reason.

Opioid drugs such as heroin interact with the body’s endogenous opioid system by binding to mu-opioid receptors; this system also plays a role in regulating sleep. Morpheus, the Greek god of sleep and dreams, gave his name to morphia or morphine, the medicinal derivative of opium. Natural and synthetic opioid drugs can produce profound sleepiness, but they also can disrupt sleep by increasing transitions between different stages of sleep (known as disruptions in sleep architecture), and people undergoing withdrawal can experience terrible insomnia. Opioids in brainstem regions also control respiration, and when they are taken at high doses they can dangerously inhibit breathing during sleep.

Addiction and sleep problems are intertwined in other, unexpected and complex ways. In a particularly fascinating finding published in Science Translational Medicine in 2018, a team of UCLA researchers studying the role of the wakefulness-regulating neuropeptide orexin in narcolepsy were examining human postmortem brain samples and found a brain with significantly more orexin-producing cells; this individual, they then learned, had been addicted to heroin. This serendipitous discovery led the team to analyze a larger sample of brain hypothalamic tissue from individuals with heroin addiction; these individuals had 54 percent more orexin-producing cells in their brains than non-heroin users. Administering morphine produced similar effects in rodents.

Further research on the overlaps between the brain circuits and signaling systems responsible for reward and those regulating sleep may help us understand individual differences in susceptibility to addiction and sleep disorders. I believe that the future of addiction treatment lies in approaches that are more personalized and multidimensional, and this includes using combinations of medications and other interventions that target specific symptoms of the disorder. It could prove very useful to target an individual’s sleep problems as one of the dimensions of treatment. For example, NIDA is currently funding research to test the efficacy of suvorexant, an FDA-approved insomnia medication that acts as an antagonist at orexin receptors, in people with opioid use disorder.

The causal relationship between impaired sleep and drug misuse/addiction can also go in the other direction. People who suffer insomnia may be at increased risk for substance use, because sufferers may self-medicate their sleep problems using alcohol or other drugs such as benzodiazepines that they may perceive as relaxing. Or, they may use stimulant drugs to compensate for daytime fatigue caused by lost sleep. Impaired sleep may also increase risk of drug use through other avenues, for instance by impairing cognition. Consequently, sleep disorders and other barriers to getting sufficient sleep are important factors to target in prevention.

Early school start times, for instance, have been the focus of considerable debate in recent years, as teenagers may be particularly vulnerable to the many health and behavioral effects of short sleep duration. I wrote previously on this blog about research findings that fewer hours of sleep correlate with increased risk of substance use and other behavior problems in teens. In this age group, tobacco, alcohol, and marijuana use are all associated with poorer sleep health, including lower sleep duration, again with possible bidirectionality of causation.

Longitudinal research is needed to better clarify the complex causal links between sleep, brain development, and mental health outcomes including substance use. The Adolescent Brain and Cognitive Development (ABCD) study is examining these relationships in a large cohort of children who were recruited at age 9-10. This longitudinal study, now in its third year, is already beginning to produce valuable findings. A team of Chinese researchers using ABCD data recently published in Molecular Psychiatry their finding that kids with depressive problems had shorter sleep duration 1 year later, as well as lower volume of brain areas associated with cognitive functions like memory. We will learn much more as the ABCD study progresses.

I find this article very interesting, we are already introducing sleep recommendations as part of our preventive tools for women, in workshops of wellness

Sleep and substance use disorders

Submitted by Deborah Morrison on March 11, 2020

We recently completed a data study (n=121) within our treatment center utilizing patient reported outcome measures (PSQI, PHQ9, GAD7) at admission, 30-days, and discharge. Results showed that perception of sleep quality significantly improved with days abstinent (30), and continued to improve significantly at discharge, with time in treatment controlled for. Regression modeling resulted in significant improvements in depression and anxiety symptoms as related to improved sleep quality. There was some indication that the benefits of sleep meds may decrease over time, but this would require further investigation. It is somewhat surprising how many patients do not realize the degree of risk posed by poor sleep quality. This is a topic that our clinical team attends to closely for each patient.

NIDA. 2020, March 9. Connections between Sleep and Substance Use Disorders. Retrieved from https://nida.nih.gov/about-nida/noras-blog/2020/03/connections-between-sleep-substance-use-disorders