Today, NIDA issued a Request for Information (RFI) from the research community and any other interested parties regarding the establishment of a standard unit dose of THC, the main psychoactive compound in cannabis, in order to facilitate research on cannabis. 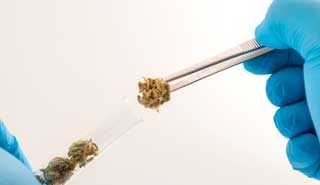 As States legalize medical and adult-use marijuana and dispensaries create greater access to cannabis, there is increased urgency to study its effects—both adverse and potentially therapeutic—in a systematic fashion. This is especially needed with the widening variety of cannabis products, such as edibles and extracts, as well as the increasing potency of cannabis available on the street and in dispensaries. One hindrance to conducting such research is the lack of a standardized measure of the THC in various cannabis products, making it hard to compare the results of different studies.

In 2017, the National Advisory Council on Drug Abuse established a Cannabis Policy Research Workgroup, which released a report in 2018 that included a recommendation that NIDA “explore the possibility of constructing a standardized dose similar to that for alcohol (the standard drink), tobacco (a cigarette), or opioids (morphine milligram equivalents) for researchers to employ in analyzing use and for users to understand their consumption.” As it now stands, measures of “joints” or “joint years,” sometimes used in research studies are not meaningful, given the wide variability in size and potency in cannabis plant material from different sources, and the current lack of standardization makes much of the experimental data on cannabis use and effects hard to interpret.

We recognize that the cannabis plant contains multiple cannabinoids and other components that may influence its overall effect, and that other factors, including route of administration, are also important. Still, THC is the major contributor to the psychoactive effects of cannabis and thus a good proxy for a standardized unit dose.  Some states have instituted standard serving sizes for edible cannabis products, based on the amount of THC contained in them; however, these are not consistent in all states.

If a standard unit dose can be established, for it to be maximally useful for research and public health, the research community will need to incorporate it in their measures of use, industry will need to adopt it for labeling, and consumers will need to be educated about what the standard dose means. Indeed, establishment of such a standard would have the greatest impact if universally adopted for commercial product labeling, allowing for more direct comparison across products and a reliable metric by which consumers can understand and accurately report their use. This may influence the way consumers think about cannabis, giving them a reliable unit to track intake—the same way people monitoring their alcohol use may count the number of drinks they have consumed on a given evening.

A standard dose is in some ways arbitrary, especially for this drug, given the shifting potency of cannabis plants, the wide variability in products, and the ways individuals use them. Designating a standard unit dose simply sets an easy-to-follow standard. Designing experiments around a standard amount of THC in whatever form it is administered or consumed (as well as increments or multiples of that amount) will greatly facilitate gathering rigorous data and comparing data across studies. It would improve our ability to assess outcomes in relation to exposure—for instance, effects on brain development in longitudinal studies like the Adolescent Brain Cognitive Development study. This could, in turn, help inform prevention strategies and policies. It would also facilitate comparing the effects of different products and different modes of ingestion in different users.

Last October in Addiction, Tom P. Freeman and Valentina Lorenzetti proposed a dose of 5 milligrams THC as optimal for research purposes. This is a dose that generally produces noticeable psychotropic effects (the high) in both naïve and experienced users, but it is low enough that it seldom produces acute adverse reactions. In a commentary last month, my NIDA colleague Susan Weiss and I concurred with those authors and their reasoning at arriving at a 5 milligram dose. But the decision about a standard unit dose should not be made unilaterally, which is why we want to hear from the research community, the public, and other stakeholders before recommending that researchers settle on any particular milligram amount for their standard, and before NIDA requires use of such a standard in NIDA-funded cannabis research.

The RFI is open through May 1st, and all researchers, stakeholders, and members of the public are encouraged to weigh in. The specific topics to address include whether 5 milligrams is indeed the best amount of THC for a standard dose; how a standard dose can optimize comparability across studies and comparability between current research and past datasets; how to implement the standard dose across various types of cannabis research, from laboratory and clinical studies to observational and epidemiological studies; and any other topic that contributors feel is relevant.

Get more information on the RFI and how to weigh in on these important questions.

Obviously no one in Government has even tried Cannabis.Perhaps you can understand the correlation between products of different THC levels to alcohol.

Low-level flower at around 17% even up to 25% THC is equivalent to beer which ranges from 3.2% to 6% depending on the state. Concentrations, ie: wax, sugar, etc and vape oil at 50% and up is equivalent to liquor.

Both alcohol and cannabis affect people differently due to their individual chemical makeup and metabolism.

Adults should have a choice. I can kill myself drinking too much alcohol. Impossible to die from too much marijuana.

What, no research? People have been using cannabis for decades if there were such a danger don't you think we would have seen society's demise by now?

Your fear of whatever, losing your position, grant money, whatever is only keeping the illegal market going strong and they LOVE you for it.

Perhaps any alcoholic beverage over 6% should be banned and a limit to how much beer one could buy say 1 sixpack per purchase should be instated. This move alone would save families from domestic violence, financial ruin, health problems and death by drunk driver, gunshot, etc.

It is not possible make

It is not possible make equivalences between THC and alcohol in terms of their impairing effects; a given amount of THC can have vastly different effects in an experienced versus a naïve user.

Note that a standard dose is not a maximum allowable limit. It is simply a unit of measure for purposes of facilitating research. If widely adopted by producers of cannabis products, it would also inform consumers how much THC they are ingesting or smoking.

Remember that cancer patients need a very high dose of THC along with a full spectrum of other cannabinoids. Reducing limit to 5 mg of THC would be a death sentence to those that now have some hope of surviving. Please don't do this to patients that now have hope! Stop believing the lies of government and big pharma. They only care about the money in its own pockets. We care about society and its potential for survival.

A standard dose is an

A standard dose is an arbitrary unit of measure for purposes of research (and potentially, product labeling). It has nothing to do with a mandated limit on THC in a product.

You mean therapeutic and potentially adverse?

I love the way you worded ADVERSE AND POTENTIALLY THERAPEUTIC when the opposite is reality.
Cannabis has been used for thousands of years for therapeutic purposes.
The “adverse” lies about it were created in 1937 when prohibition agents needed SOMETHING to prohibit!
Lucky they didn’t go after caffeine or you wouldn’t be sipping coffee while you read this comment!
Or rather you WOULD be, secretly, in spite of the NIDA warning about the “adverse” effects of caffeine!

They don’t care that they’re being hypocrites!
They want something to spend hundreds of millions of dollars “researching”.
(30 mg is standard dose for edibles, likely same for smoked or vaped).
There’s your answer.
Meanwhile everything the first comment or says is true.
What are the “therapeutic” uses for alcohol?
Does alcohol cause any harm? YA THINK?
It’s all about how much they can pay themselves.....

Mj itself exhibits a very high dose range. it is important to establish a therapeutic range/adverse dose range/lethal dose range. And we recognize that many clients consume multiple psychoactive substances. And by many, MJ is perceived as harmless.
Rich

One Nation Under Marijuana

Regarding the liberalization of marijuana, can we stop for a moment and look at what is happening to our country?
Marijuana use is infiltrating all walks of life and at all ages. Legalization was supposed to end violent crime, it didn't. Legalization ended none of the problems. Pot farms on national forests kill much of the wildlife from rodenticides, or water drainage, and occasionally lead to major forest fires. But we look away.

Nurse practitioners push this drug to vulnerable patients, some doctors prescribe it as medicine and in fact I know of incidents where young mothers gave this drug to their infants. Stop in a music hall, or any concert, and somebody invariably lights a joint and blows the smoke everywhere.

The major media tell one lie after another about so-called marijuana arrests or mass incarceration when the reality is always something else. Entertainers promote this drug, even its illegal use, and society just looks the other way.

With regards to the science of marijuana, every single warning that comes along is instantly rebutted by so-called "experts" who plaster the media with their own propaganda. One thing I have learned over many years is those who use this drug, legally or not, often say "Yes" to other drugs as well.

We are a country that is asleep at the switch. Nobody has the guts to take a national stand. Thus marijuana is now becoming more American than apple pie. Is that what we want? Apparently so.

I think the best move of the government is help the cannabis industry in regulating and providing standard unit dose for thc. At least, entrepreneurs and users are aware as to how much must be consumed.