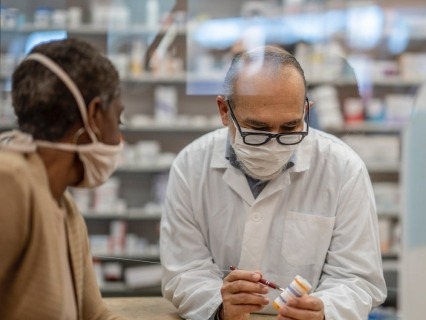 WHAT: A collaborative approach to treating opioid use disorder that relies heavily on community pharmacists is feasible and may increase adherence and participant satisfaction, according to a pilot study published today in Addiction. The study was supported by the National Institute on Drug Abuse (NIDA), part of the National Institutes of Health, through the NIDA Center for the Clinical Trials Network.

Most people with opioid use disorder who would benefit from medication do not receive it. Buprenorphine is a safe and effective medication that has been used in opioid addiction treatment for nearly two decades, but providers must complete training and receive a special waiver in order to prescribe buprenorphine to treat opioid use disorder. In the United States, fewer than 10% of primary care providers are authorized to prescribe buprenorphine, and more than 20 million people in the United States live in a county without a buprenorphine-waivered physician. This lack of access is a significant barrier to treatment, especially to people in underserved communities.

To help address treatment gaps, investigators studied the transfer of care of 71 participants using buprenorphine maintenance therapy for opioid use disorder from waivered physicians to trained community pharmacists. About 90% of people in the United States live within five miles of a community pharmacy.

Researchers from Duke University, Durham, North Carolina, and their collaborators found nearly 89% of participants remained in the study and 95.3% adhered to the daily medication regimen. During the 6-month trial, no opioid-related emergencies or hospitalizations were reported. The proportion of opioid-positive urine drug screens was less than 5% at month 6 among participants who completed all urine drug screens in the study. Participants, physicians, and pharmacists alike reported high rates of satisfaction with the program.

Investigators recruited 71 adults currently receiving office-based buprenorphine treatment for opioid use disorder in the Raleigh-Durham, N.C., area from March to December 2018. Six physicians and six community pharmacists took part in the trial. The initial treatment phase, in which the buprenorphine dose is gradually increased until a satisfactory daily dose is reached, was carried out under the care of a waivered physician. Then, participants attended monthly maintenance visits in which pharmacists dispensed buprenorphine, assessed how well the medication was working, and provided counseling and referrals to specialists as needed. Pharmacists then provided feedback to the partnering physician to adjust buprenorphine dosage as needed.

The researchers concluded that the pilot study offers strong support for advancing physician-pharmacist team-based approaches to leverage the abundant resource of community pharmacies in expanding access to opioid use disorder treatment with buprenorphine. Larger clinical trials are needed to establish strategies and approaches to most effectively implement team-based buprenorphine care and respond to the needs of diverse clinical settings and populations.

WHO: Nora Volkow, M.D., director of NIDA, is available for comment.