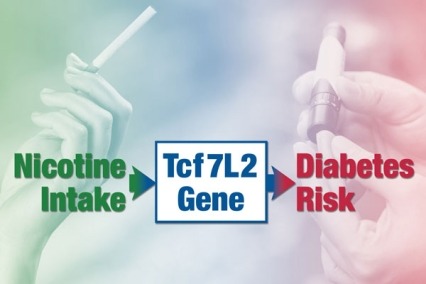 Nicotine can increase blood sugar levels in humans, and people who smoke have a much higher risk of diabetes than nonsmokers. In a recent NIDA-sponsored study, researchers in the lab of Dr. Paul J. Kenny and colleagues from the Icahn School of Medicine at Mount Sinai and other institutions have shed light on the association between smoking and diabetes. The researchers identified a protein, transcription factor 7-like 2 (Tcf7l2), that is found in high levels in a brain region called the medial habenula and that links nicotine’s addictive properties to its diabetes-promoting actions.

Tcf7l2 Is Part of a Signaling Cascade

Among its many actions, nicotine activates nicotinic cholinergic receptors in the medial habenula; this activation induces unpleasant responses that cause an animal or person to avoid nicotine. The researchers had previously shown that the neuropeptide glucagon-like peptide-1 (GLP-1) enhances habenular function and thereby increases nicotine avoidance behaviors in rats. In the current study, the investigators explored how GLP-1 acts in the habenula to control nicotine intake.

Tcf7l2 is a major component of the signaling cascade that translates GLP-1’s actions into changes in gene expression. The researchers therefore investigated this protein’s role in controlling nicotine intake. Because GLP-1/Tcf7l2 signaling has been implicated in type 2 diabetes, they also analyzed nicotine’s effects on blood glucose regulation and the contribution of Tcf7l2 activity in the medial habenula in this process.

The investigators conducted a series of experiments using rats that had been genetically modified to carry a defective Tcf7l2 gene with reduced activity in the medial habenula. When these animals were trained to self-administer nicotine, they responded more vigorously and consumed greater nicotine quantities than did control rats with an intact Tcf7l2 gene (see Figure 1). Further experiments suggested that the Tcf7l2-deficient rats developed greater tolerance to some of nicotine’s aversive effects that normally limit nicotine consumption.

Dr. Kenny describes the implications of these findings as “quite far reaching” because the data suggest that smoking-related diseases associated with peripheral organ dysfunction, such as diabetes, may actually originate in the brain and not in the affected organ systems in people who smoke tobacco. Additionally, the findings raise the intriguing possibly that alterations in peripheral organ function can “feed back” to the brain to modulate nicotine’s addictive properties. Explains Dr. Kenny, “In effect, we have a yin-yang process whereby the brain controls peripheral diseases, and peripheral organs can regulate the addictive properties of nicotine. So, we have to view addiction and addiction-related diseases from a holistic, whole-organism perspective.”

NIDA. 2020, May 12. Expression of a Gene in the Brain Links Nicotine Addiction to Diabetes. Retrieved from https://nida.nih.gov/news-events/nida-notes/2020/05/expression-gene-in-brain-links-nicotine-addiction-to-diabetes

NIDA. "Expression of a Gene in the Brain Links Nicotine Addiction to Diabetes." National Institute on Drug Abuse, 12 May. 2020, https://nida.nih.gov/news-events/nida-notes/2020/05/expression-gene-in-brain-links-nicotine-addiction-to-diabetes

NIDA. Expression of a Gene in the Brain Links Nicotine Addiction to Diabetes. National Institute on Drug Abuse website. https://nida.nih.gov/news-events/nida-notes/2020/05/expression-gene-in-brain-links-nicotine-addiction-to-diabetes. May 12, 2020