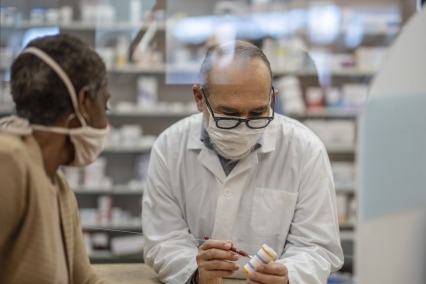 Effective medications are available for treating people with opioid use disorder (OUD). They include the opioid agonist medications methadone and buprenorphine as well as the opioid antagonist naltrexone. Nevertheless, the majority of people in the United States seeking help for OUD only receive counseling, drug testing, peer support, or education.

In a recent NIDA-supported study, Dr. Noa Krawczyk from the NYU Grossman School of Medicine and colleagues from the Johns Hopkins Bloomberg School of Public Health and other partner institutions analyzed treatment data and state death records of patients with OUD in Maryland to demonstrate that those who were treated with agonist medications were less likely to die from an overdose than those who only received non-medication forms of care or support (called “non-medication treatment” for purposes of the study). “This is one of the first state-wide studies in the United States to quantify the significant role that agonist medication treatments play in reducing overdose risk relative to treatments that do not involve medications, which unfortunately continue to be the norm in our country,” says Dr. Krawczyk.

Medication Treatment Has Greater Effect on Overdose Risk During Therapy

The study had some limitations: It used an observational design and included only patients in publicly funded specialty clinics; it also could not account for additional factors that might have affected overdose death rates, such as differences in service settings, reasons for leaving treatment, ongoing substance use, and switching between providers. In addition, a much higher proportion of the study population (72 percent) received medication treatment than is typical for U.S. patients with OUD. Nevertheless, the study demonstrated that outpatient medication treatment for OUD in community specialty clinics can reduce overdose deaths.

According to Dr. Krawczyk, the study findings have several implications. “From a policy perspective, more needs to be done to encourage and require treatment programs for OUD to offer and prioritize medication treatment, especially programs that serve those least likely to get these medications, such as youth, people experiencing homelessness, and people who are justice involved,” she says. She adds, “But engagement in medication treatment is not enough on its own—we also need to work harder to improve retention in care, by making treatment more welcoming, less burdensome, and more patient-centered.”

This research was supported by NIDA grant DA047021.

NIDA. 2021, May 21. Medication Treatment of Opioid Use Disorder Can Protect Against Overdose Death . Retrieved from https://nida.nih.gov/news-events/nida-notes/2021/05/medication-treatment-opioid-use-disorder-can-protect-against-overdose-death

NIDA. "Medication Treatment of Opioid Use Disorder Can Protect Against Overdose Death ." National Institute on Drug Abuse, 21 May. 2021, https://nida.nih.gov/news-events/nida-notes/2021/05/medication-treatment-opioid-use-disorder-can-protect-against-overdose-death

NIDA. Medication Treatment of Opioid Use Disorder Can Protect Against Overdose Death . National Institute on Drug Abuse website. https://nida.nih.gov/news-events/nida-notes/2021/05/medication-treatment-opioid-use-disorder-can-protect-against-overdose-death. May 21, 2021