Teens who misuse medicines get them from multiple sources

Two NIDA-funded studies have found that adolescents using multiple sources for prescription medications are at high risk for other substance use. The studies reviewed data related to the self-reported misuse of opioids, stimulants, and tranquilizers/sedatives or anxiolytics. 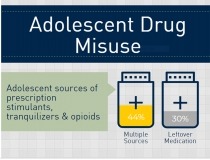 Image by University of Michigan

One study (McCabe, et al) analyzed survey responses from more than 18,000 high school seniors from NIDA’s annual Monitoring the Future survey, years 2009-2016, conducted by the University of Michigan Center for the Study of Drugs, Alcohol, Smoking and Health. Roughly 11% of these seniors reported prescription drug misuse during the past year, and of those, 44% used multiple supply sources. The investigators also found that 30% of those who misused prescription drugs took their own leftover medication, with girls more likely to take leftovers than boys. Boys were more likely to obtain prescription drugs from friends or purchase them. The authors suggest that patients and families should receive education on how to manage and properly dispose of controlled medications to avoid misuse and possibly use prescription drug monitoring programs.

The other study (Schepis, et al) identified sources of controlled medications and related behaviors in more than 100,000 adolescents ages 12 to 17 from the 2009-2014 National Surveys on Drug Use and Health, coordinated by the U.S. government’s Substance Abuse and Mental Health Services Administration. More than 70% of adolescents who obtained prescription drugs from multiple sources had a substance use disorder within the previous year involving prescription medications, other drugs, or alcohol. Adolescents received the medications from friends and family, bought them with legal prescriptions, or acquired them through theft or fake prescriptions.

Both studies were published in the July issue of the Journal of the American Academy of Child and Adolescent Psychiatry. The investigators are from the University of Michigan, Texas State University, Massachusetts General Hospital, Harvard Medical School and the University of Central Florida at Orlando. The University of Michigan has developed an infographic highlighting their findings: https://news.umich.edu/about-44-of-high-school-seniors-who-misuse-prescription-drugs-have-multiple-drug-sources/. 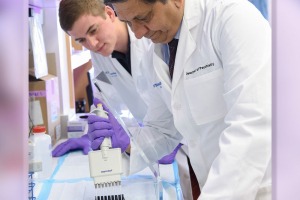 NIDA. 2019, August 8. Teens who misuse medicines get them from multiple sources. Retrieved from https://nida.nih.gov/news-events/science-highlight/teens-who-misuse-medicines-get-them-multiple-sources