This infographic of the NIH’s 2018 Monitoring the Future survey highlights drug use trends among the Nation’s youth for vaping, marijuana, alcohol, cigarettes, and prescription/OTC drugs. 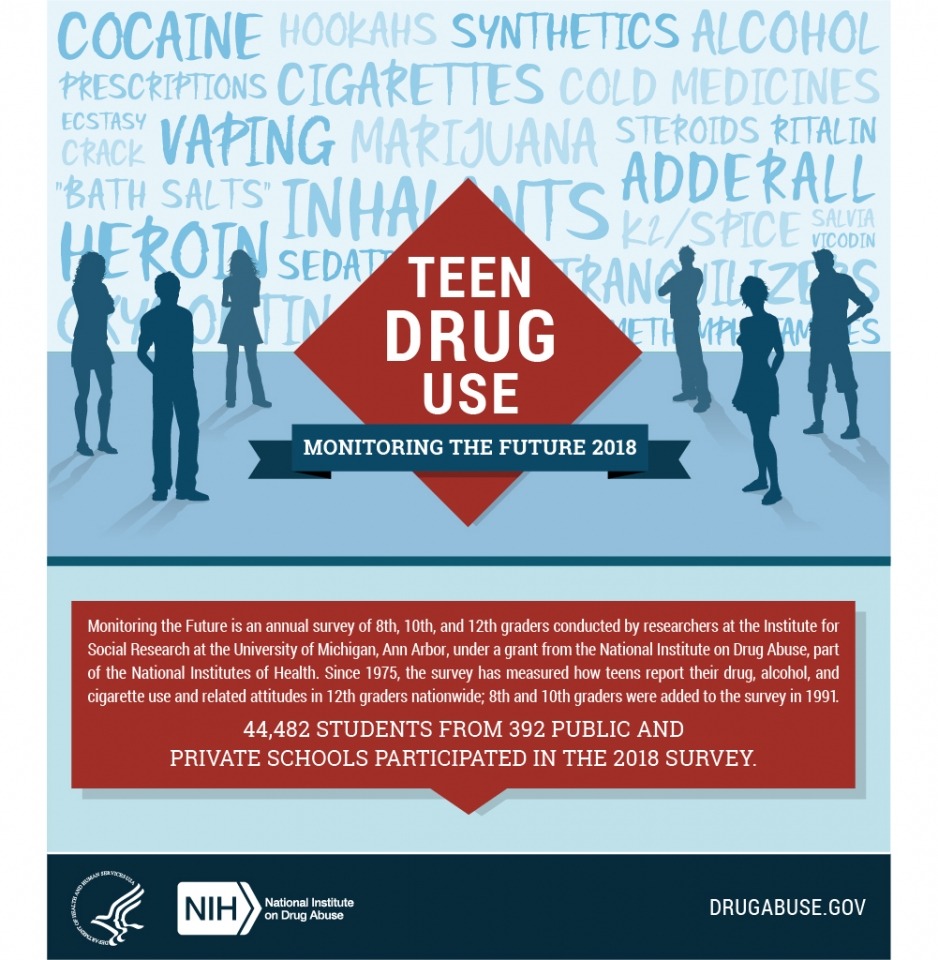 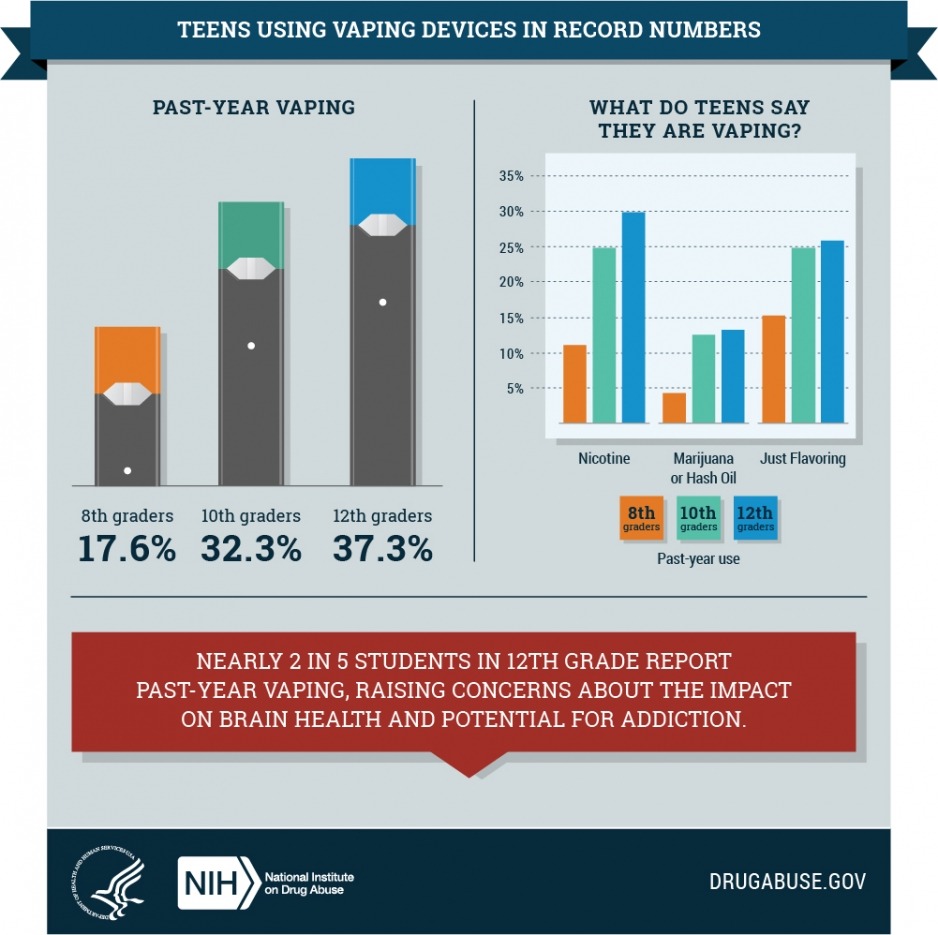 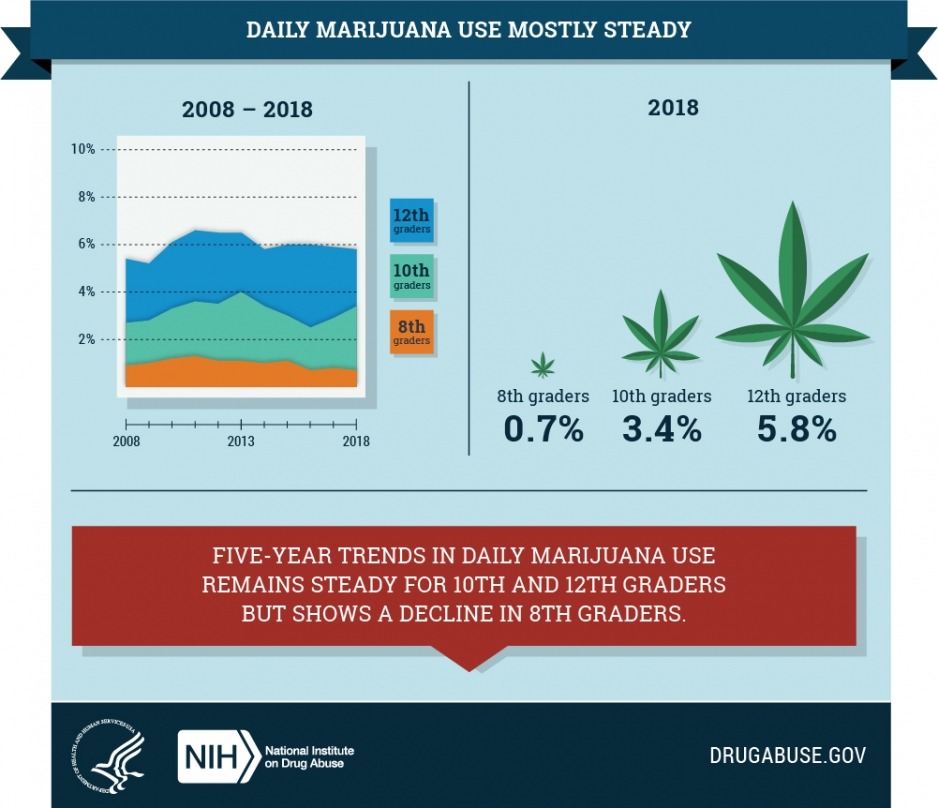 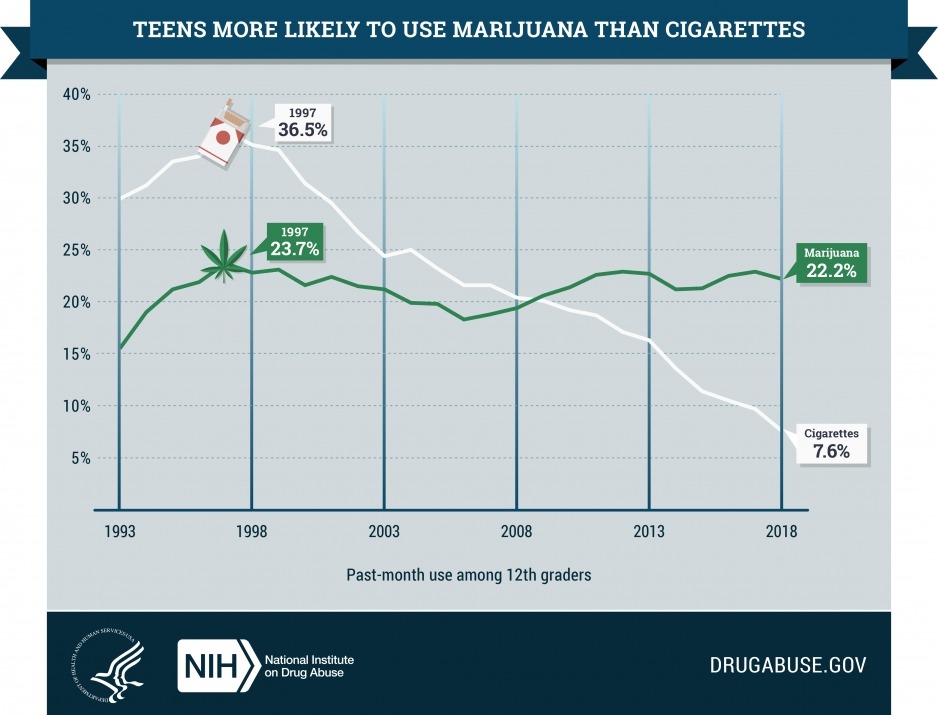 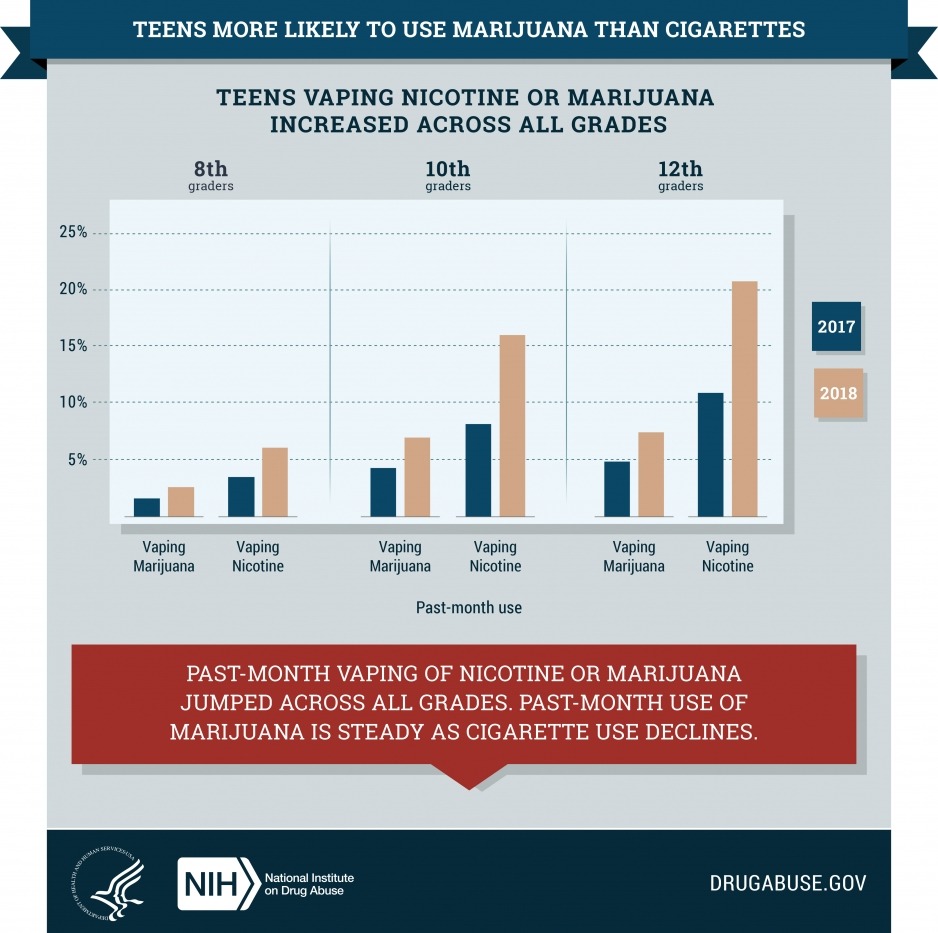 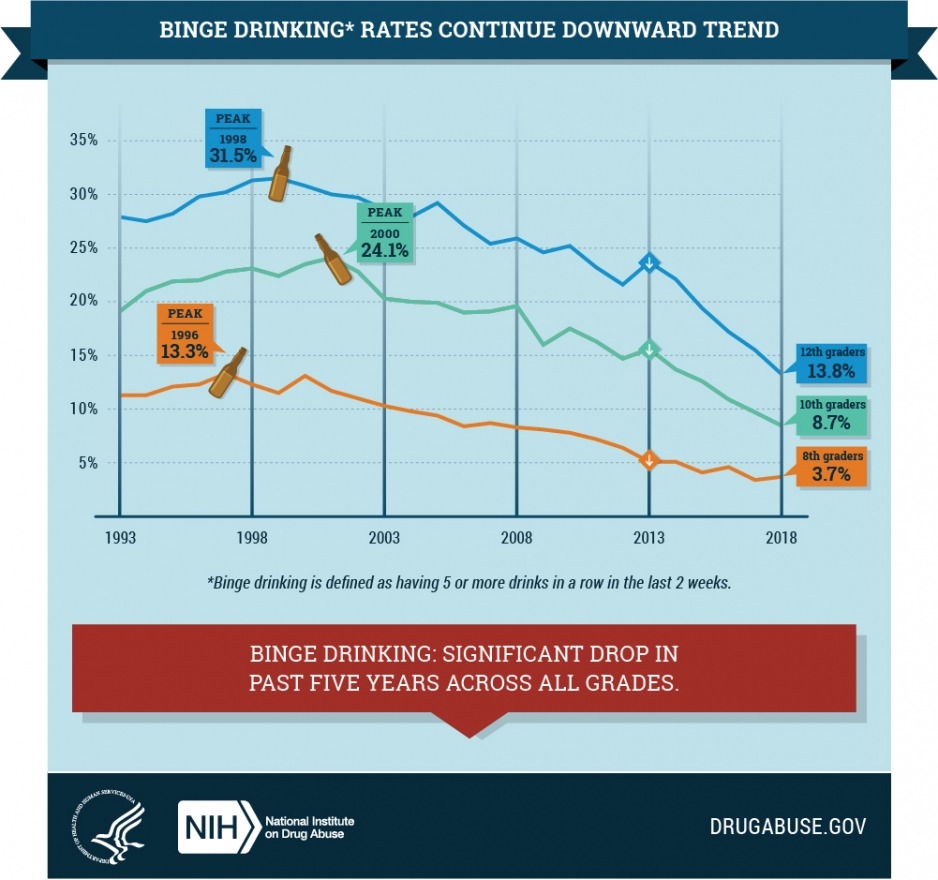 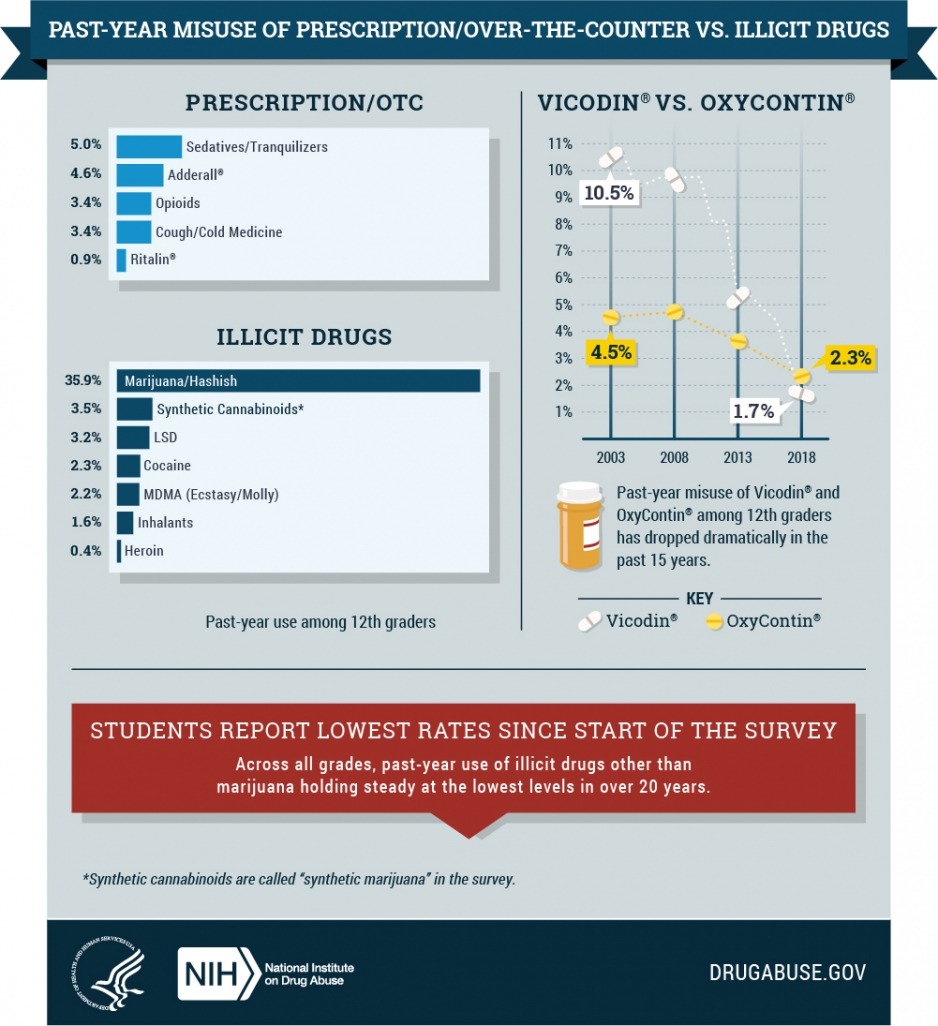 Monitoring the Future is an annual survey of 8th, 10th, and 12th graders conducted by researchers at the Institute for Social Research at the University of Michigan, Ann Arbor, under a grant from the National Institute on Drug Abuse, part of the National Institutes of Health. Since 1975, the survey has measured how teens report their drug and alcohol use and related attitudes in 12th graders nationwide; 8th and 10th graders were added to the survey in 1991.

Nearly 2 in 5 students in 12th grade report past-year vaping, raising concerns about the impact on brain health and potential for addiction.

The survey also asked students what they thought they were vaping. These were their responses:

Five-year trends in daily marijuana use remains steady for 10th and 12th graders but shows a decline in 8th graders.

Figure 4: Teens More Likely To Use Marijuana Than Cigarettes

Teens Vaping Nicotine or Marijuana Increased Across All Grades
Past-month vaping of nicotine or marijuana jumped across all grades. Past-month use of marijuana is steady as cigarette use declines.

2017 and 2018 monthly nicotine or marijuana vaping use for each grade was:

Binge drinking (five or more drinks in a row in the last 2 weeks) dropped significantly in the past five years across all grades.

Students Report Lowest Rates Since Start of the Survey
Across all grades, past-year use of illicit drugs other than marijuana holding steady at the lowest levels in over 20 years. (*Synthetic cannabinoids are called “synthetic marijuana” in the survey)

For more information, visit us at @NIDAnews or drugabuse.gov.

The National Institute on Drug Abuse (NIDA) is a component of the National Institutes of Health, U.S. Department of Health and Human Services. The NIDA supports most of the world’s research on the health aspects of drug abuse and addiction. Fact sheets on the health effects of drugs of abuse and information on NIDA research and other activities can be found at drugabuse.gov.