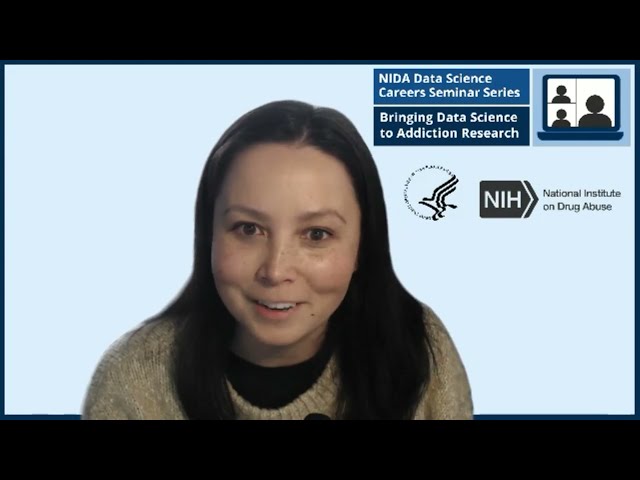 This series will take place on the following dates from 9:00-10:30am EDT (Please note that this is during Daylights Savings Time): March 15th, March 22nd, March 29th, and April 5th. 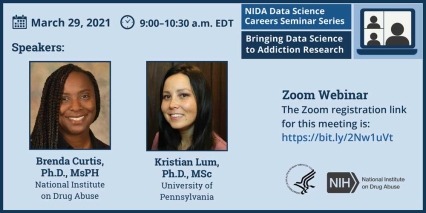 Dr. Curtis earned both a bachelor’s degree in biology and a master’s degree in public health from the University of Illinois and subsequently obtained her doctorate in communication from the University of Pennsylvania, where she most recently held the appointment of Assistant Professor of Psychology in Psychiatry, Addictions at the Perelman School of Medicine. Dr. Curtis also completed a fellowship at the Fordham University HIV and Drug Abuse Prevention Research Ethics Training Institute. Before joining NIDA IRP, she was the PI of a NIDA-funded R01 award (DA039457) entitled “Predicting AOD Relapse and Treatment Completion from Social Media Use” in which she used social media data to predict alcohol and other drug relapse and treatment completion among patients who have recently entered community outpatient treatment programs. She has also served as a co-investigator on several R01 NIAAA, NCI, and NIDA funded projects including a placebo-controlled trial of bupropion for smoking cessation in pregnant women in which we are using SMS text messaging to promote medication adherence; a multi-modal intervention on the use of a “smart” pillbox to promote medication adherence among non-adherent patients; a study examining the accuracy of smartphone breathalyzers; and a study examining the impact of a smart-phone based continuing care “app” for alcohol dependence. Her training in public health and health communication allows her to employ a public health approach while using effective communication techniques to ensure recruitment and retention rates are achieved.

Kristian Lum, Ph.D., MSc, is an Assistant Research Professor in the Department of Computer and Information Science at the University of Pennsylvania. She studies and develops statistical and machine learning models to tackle problems with social impact. This includes statistical population estimation models to estimate the number of undocumented victims of human rights violations, “fair” algorithms for use in high-stakes decision making, and epidemiological models to study disease spread among and between marginalized populations and the broader community. Dr. Lum is particularly interested in applications to criminal justice. She enjoys using the tools of statistics and machine learning to shine a light on alternative interpretations of data. She is often just as (if not more) interested in what is missing from a dataset than what is in it.