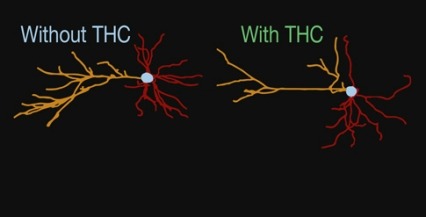 A NIDA-supported study may help explain observed links between adolescent marijuana use and vulnerability to psychiatric disorders. The findings indicate that exposure to the drug’s main psychoactive ingredient, Δ9-tetrahydrocannabinol (THC), disrupts normal maturation of pyramidal neurons in the prefrontal cortex (PFC). These neurons are crucial for the performance of the PFC, which mediates decision making, impulse control, and emotional regulation, among other cognitive functions. The study findings show that THC interferes with their development in ways that may increase adolescent cannabis users’ risks for addiction and schizophrenia.

Dr. Michael Miller, Dr. Hurd, and colleagues at the Icahn School of Medicine examined THC’s effects on pyramidal neurons in the rat version of the PFC, called the prelimbic cortex (PLC). In the PLC, as in the PFC, pyramidal neurons undergo a dual process of development during the transition from adolescent to adult neuronal networks. They increase and extend their dendrites, the filaments that collect incoming signals from throughout the brain and conduct them to the neuron body for processing. They also prune away little-used dendritic spines, the structures on dendrites where the incoming signals arrive. Together, these processes strengthen and extend neuronal circuits that have proven useful to the adolescent and increase circuit efficiency by removing excess signal inputs. Once dendrite growth and pruning are complete, the brain is fully mature.

The research team injected male rats three times each week during the period of their adolescence, from age 4 weeks to 7 weeks. The injections produced serum THC levels in the rats similar to those that cause acute cannabis intoxication in humans. The researchers collected brain tissue from some animals 1 day after the last injection (equivalent to late adolescence), and from others 2 weeks after the last injection (equivalent to young adulthood).

Microscopic analyses revealed that PLC neurons of THC-exposed young adult animals had, compared with unexposed animals, an altered dendritic tree with sparser branches (Figure 1). The exposed animals also had fewer dendritic spines in both late adolescence and early adulthood (Figure 2). This latter finding suggests that THC exposure had accelerated pruning, possibly removing some spines that otherwise would have persisted and been incorporated into the animals’ adult neurocircuitry. The changes observed in the THC-exposed PLC neurons resembled those previously reported in animal models of various psychiatric disorders.

The researchers also showed that THC exposure in adolescence was associated with changes in gene expression, including of genes with roles in neuron growth and structure. In this research, they used a novel approach called laser capture microdissection and next-generation RNA sequencing to capture and analyze genetic expression in individual pyramidal neurons in a specific area of the PLC (cortical layer II/III). They found that the activity of genes which influence cytoskeletal activity, dendritic branching, and synaptic plasticity differed between the THC-exposed and control animals. The changes observed in the THC-exposed animals were similar to those seen in gene networks that have been linked to psychiatric diseases such as schizophrenia and mood disorders. THC exposure also altered expression of genes involved in epigenetic regulation, suggesting that exposure in adolescence could have continuing effects on neuronal gene expression and function later in life.

Dr. Hurd and colleagues concluded that adolescent THC exposure likely modifies the genetic activity of PFC pyramidal neurons, altering their structure and possibly increasing risk for psychiatric disorders. Their conclusion dovetails with the findings of a recent neuroimaging study of people who regularly used marijuana, which disclosed altered neuronal structure and also pointed to premature pruning in the PFC. Another recent study linked cannabis dependence simultaneously to altered neuronal connections in subcortical brain regions and vulnerability to psychopathology, especially in people who started using the drug early.

Dr. Hurd says, “More research is needed to assess the long-term effects of the THC-induced changes in the PFC as well as THC’s effects on other brain cells. Future studies are needed to confirm a functional impairment in the mesocorticolimbic circuit by adolescent THC exposure and the causal association with specific behaviors relevant to addiction and psychiatric vulnerability. It is also important for future studies to characterize the molecular signature of diverse cortical cells and in different cortical layers to fully identify specific circuits that may be most vulnerable to adolescent THC exposure.”

The figure illustrates how THC exposure during adolescence alters dendritic branching of PLC pyramidal neurons during development. Panel A shows graphic illustrations of pyramidal PLC neurons of rats exposed to vehicle (control; left illustrations) or THC (right illustrations) at 24 hours (top) and 2 weeks (bottom) after the last drug administration. Apical dendrites are shown in orange, basal dendrites are shown in red, and the neuron’s cell body (soma) is shown in light blue. At 24 hours after last administration, PLC neurons from vehicle-exposed and THC-exposed animals show similar degrees of dendrite branching. At 2 weeks after last drug administration, dendrite branching in the THC-exposed animals is reduced compared with the vehicle-exposed animals.