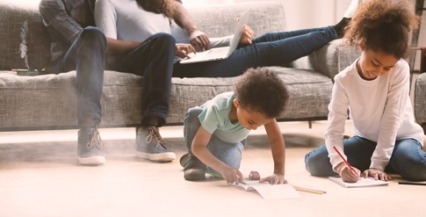 Although childhood exposure to harmful tobacco smoke has decreased significantly in the past two decades, a new NIDA-sponsored study reports that significant disparities remain. Black children and those from low-income households are most likely to be exposed to tobacco smoke.

Dr. Ashley Merianos and colleagues from the University of Cincinnati, Cincinnati Children’s Hospital Medical Center, and the National Institute on Minority Health and Health Disparities examined the prevalence of tobacco smoke exposure (TSE) among 14,199 children ranging in age from 3 to 11 years who had participated in the 1999 to 2014 National Health and Nutrition Examination Survey (NHANES). The researchers measured blood serum levels of cotinine, a biomarker of TSE. Their analyses found that according to the most recent survey, an estimated 14 million children ages 3 to 11 still were exposed to tobacco smoke, but that the proportion of all children with TSE had dropped: from 64.5 percent in 1999 to 38.1 percent in 2014. This relative decline of 44.4 percent was slightly lower than the goal of 47 percent established by the Healthy People 2020 initiative—a national strategy launched by the federal government to identify diseases and disorders and to set measurable goals at the national, state, and local levels to improve public health.

More in-depth analysis of data from the most recent survey (2013–2014) revealed persistent disparities in TSE among sociodemographic groups. For example, non-Hispanic black children were nearly two times more likely than non-Hispanic white children to be exposed to tobacco smoke, and children from low-income households (≤130 percent of the federal poverty level [FPL]) were 3.37 times more likely than those from the highest-income households (>185 percent of FPL) to be exposed. Children living in rented homes were 2.23 times more likely to be exposed to tobacco smoke than those living in family-owned homes (see Figure). These disparities were similar to those noted in the 1999–2000 survey.

"We found slower declines in exposure among certain groups, highlighting vulnerable child populations and the critical need for more work in this area to reduce their TSE," explains Dr. Merianos. TSE prevention and reduction efforts targeted to homes and schools in these communities may further reduce TSE prevalence and its associated health risks, including respiratory illnesses, infection, and premature death.

"Tobacco smoke exposure is a common and completely preventable hazard for children. Our study’s specific findings show a reduction in TSE over a 15-year period," says Dr. Merianos. However, she acknowledges that the study may have underestimated TSE in children who were infrequently exposed to tobacco smoke, because cotinine breaks down quickly, with a half-life of about 15 to 20 hours in children, and thus TSE may not have been captured accurately at the time of testing. Additionally, exposure of children older than age 11 years was not measured.

Dr. Merianos emphasizes the relevance of the findings. "These data are especially important for planning Healthy People 2030’s tobacco use objectives to continue implementing social and environmental changes and policies to eliminate child TSE," she says, adding, "It is important to continue setting these goals to increase the proportion of smoke-free homes, public places, and cars nationwide, and to establish the enforcement of supporting laws, such as banning smoking in private and public places."

This study was supported by NIDA grant DA044313.