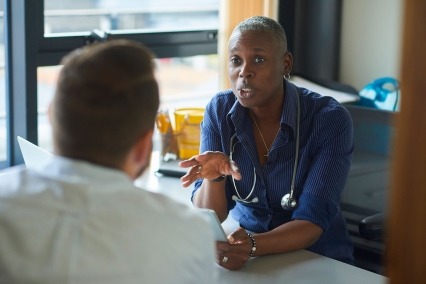 By the time someone reaches out for addiction care, they may have already suffered numerous painful losses in their lives. Addiction can steal a person’s happiness, job, friends and family, and can erode their freedom.

Far too often, the expectation is that someone must hit “rock bottom” before treatment can work. But this is a myth that can have dire consequences. By then the damage is consequential and the road to recovery much harder. Factually, the best time to get help is as soon as possible. Yet frequently when a person asks for help early on, society—friends and family, coworkers, health care systems—do not recognize it as a serious issue. They may ignore or deny it.

In a commentary published today in JAMA Psychiatry, Tom McLellan of the Treatment Research Institute, National Institute on Alcohol Abuse and Alcoholism Director George Koob, and I raise the possibility of moving toward a plan for better detection and support of those in the early stages of substance use disorder that, if untreated, may lead them to develop a severe health condition—addiction.

To define this early stage that we refer to as “pre-addiction,” we propose considering the criteria of mild or moderate substance use disorder (SUD). Identification of “pre-addiction” as an early condition of addiction could motivate greater attention to the risks associated with early-stage substance use disorder and help marshal the policies and healthcare resources that will support preventive and early intervention measures.

We are proposing the term “pre-addiction” because it gives a readily understandable name to a vulnerable period of time in which preventive care could help avert serious consequences of drug use and severe substance use disorders. This is akin to how we counsel and provide for care to prevent chronic diseases like heart disease or diabetes for patients who demonstrate higher risk of developing those conditions.

Healthcare in the U.S. is notoriously bad at delivering preventive medicine. Despite the well-known conventional wisdom that an ounce of prevention is worth a pound of cure, the system has always been set up to treat diseases and disorders once they manifest, not avert them. This has started to change for some conditions, however. For instance, it is now standard to monitor risk factors like cholesterol, blood pressure, and BMI during routine checkups, so that steps can be taken to avert heart attacks or stroke through some combination of lifestyle changes and medications.

One of the definitions of addiction is inability to control drug use despite adverse health consequences and even despite a desire to change. For those meeting the criteria of severe substance use disorder, treatment and external recovery supports are often needed. Unfortunately, just 10 percent of people who could benefit from treatment get it. Prior to reaching this point, however, it is easier for people to exert control, including by setting limits and being more mindful of their substance use.

Increased awareness of the harms of heavy drinking and binge drinking even outside of a diagnosed alcohol use disorder, for instance, has alerted people to unhealthy patterns that in an earlier era escaped attention because the crucial addiction criterion—inability to control use—was not met. A diagnosis of pre-addiction could similarly serve as an alert to the individual about a behavioral pattern with potentially major—but also very preventable—health and life consequences down the road. It could create a different inflection point, one that recruits the patient more actively as an agent in their own health and wellness.

It could also save lives. Today’s extremely hazardous drug landscape is dominated by fentanyl, which is increasingly contaminating or being sold in place of non-opioid drugs. Even people who only take drugs occasionally, and even people who do not knowingly take opioids, run the risk of a fatal overdose. Some lever is needed to enable routine healthcare to serve as a screening and teaching opportunity about the danger of drug contamination that people who use illicit drugs face, even those who only use them occasionally.

There is a need for a wider range of evidence-supported and reimbursable interventions for individuals meeting pre-addiction criteria, and clinicians would need to know how to deliver them or refer patients to the appropriate specialists. NIDA is already directing substantial funding, including via the Helping to End Addiction Long-term® Initiative, or NIH HEAL Initiative®, to increase the range of addiction treatments, but a diagnostic framing of mild to moderate substance use disorder as pre-addiction could create a market and thus incentive for greater development of interventions to prevent addiction from developing in the first place. This could potentially even include devices and over-the-counter aids that people could use on their own initiative without a doctor’s supervision.

A concept of pre-addiction would also require—but in turn could facilitate—greater public and clinical advocacy about addiction and how it develops. Currently the genetic and behavioral risk factors for diabetes are well-known, as are the clinical indicators of “pre-diabetes,” which can facilitate early intervention. Greatly needed is improved training in medical schools for recognizing and addressing all levels of substance use disorder, including low-severity substance use disorder that is nevertheless a risk for becoming more severe.

There are many questions, however, and such a paradigm change requires hearing multiple perspectives and diverse voices. We want to hear from the public, including people with lived experience, and from clinicians about the potential advantages as well as drawbacks of a pre-addiction framing. Above all, it is critical that changes to clinical practice alleviate, rather than exacerbate, harmful stigma.

Rebranding mild to moderate substance use disorder as a common and addressable behavioral health pattern could normalize and thus destigmatize potentially unhealthy substance use that does not merit the specialized interventions required to treat addiction, while also raising awareness of the potential health risks of such a pattern. However, interventions should ensure that the pre-addiction label does not lead to stigmatization of the people to whom it is applied. In particular, this will require legal protection when disclosing drug use to physicians. Unless drug use is decriminalized, fear of disclosure presents an obvious challenge to screening for and medically addressing non-disordered substance use in general medical settings.

Whether it comes with a “rebranding” or sparks renewed thinking, it is important that we understand addiction not as a disease that appears overnight, but as a condition with a backstory: a history of escalating substance-taking, often exacerbated by environmental and personal historical circumstances and by genetic risk factors. A greater awareness of the potential negative trajectories from substance use disorder and opportunities to prevent them will empower those in the early stages of a substance use disorder to arrest its escalation.