Naloxone is an opioid antagonist that can reverse an opioid overdose. Naloxone access increased between 2010 and 2014, with:8

Naloxone prescriptions dispensed from retail pharmacies increased nearly twelvefold between the fourth quarter of 2013 and the second quarter of 2015.112

Most states have passed laws to widen the availability to naloxone for family, friends, and other potential bystanders of overdose. 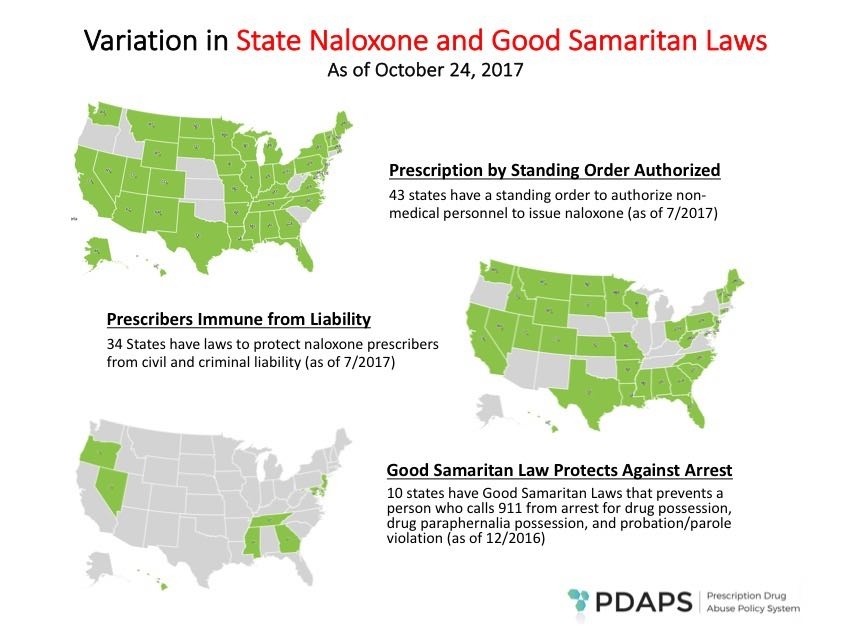 After a naloxone training session, a majority of police officers reported that it would not be difficult to use naloxone at the scene of an overdose (89.7 percent) and that it was important that other officers be trained to use naloxone (82.9 percent).114

Overdose education and naloxone distribution (OEND) has been shown to increase the reversal of potentially fatal overdoses; one study showed opioid overdose death rates to be 27 to 46 percent lower in communities where OEND was implemented.115 Among 4,926 people who used substances and participated in OEND in Massachusetts, 373 (7.6 percent) reported administering naloxone during an overdose rescue, with few differences in behavior between trained and untrained overdose rescuers.116 A naloxone distribution study in San Francisco reported that 11 percent of participants used naloxone during an overdose; of 399 overdose events where naloxone was used, 89 percent were reversed.117 Brief education is sufficient to improve comfort and competence in recognizing and managing overdose.118 Prospective studies are needed to determine the optimal level of training and whether naloxone rescue kits can meet the standard for becoming available over the counter.116

In a probabilistic analysis, naloxone distribution programs were shown to prevent overdose deaths, increase quality-adjusted life years (QALYs) and be highly cost-effective. Naloxone distribution was predicted to prevent 6 percent of overdose deaths, 1 for every 227 naloxone kits distributed. Cost effectiveness, under markedly conservative predictions, was measured to be $14,000.00 per QALY, well within the standard favorable range of cost-benefit ratios (under $50,000.00 per QALY).119

Critics of naloxone distribution have claimed that it could lead to an increase in risky opioid use, but a study in Massachusetts showed rates of opioid-related emergency department visits and hospital admissions were not significantly different in communities with low or high implementation of OEND programs.115