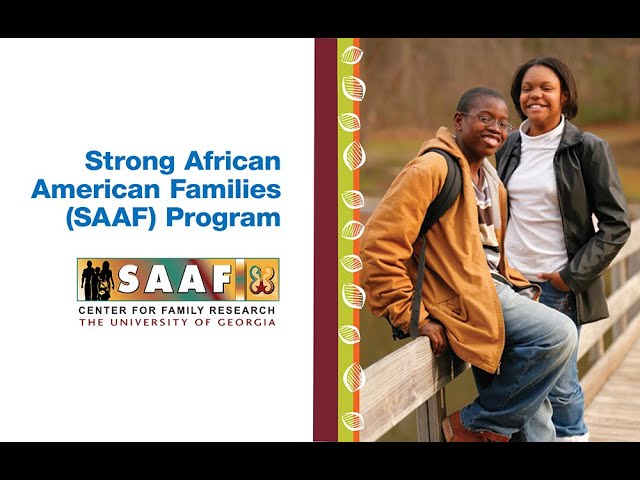 Dr. Gene Brody and colleagues at the Center for Family Research at the University of Georgia developed a program to improve the well-being and outcomes of rural African American youth by strengthening parenting practices and youth protective factors.

The benefits of this Strong African American Families, or SAAF, program have been demonstrated in multiple randomized controlled studies conducted for nearly two decades.

The SAAF program shows how supportive family relationships, along with the development of youth protective processes like a positive racial identity, self-regulation, and the ability to resist peer influences, can counter some of the challenging circumstances that rural African American youth find themselves in in their day-to-day lives.

The researchers initially developed SAAF to help rural African American communities in the "Black Belt" of the southeastern United States.

These communities face challenges such as high poverty rates and particularly high rates of childhood poverty.

In 2017, 30 to 100 percent of school-age children in many southeastern rural districts lived in poverty.

Living with these stressors puts children at risk for detrimental outcomes, including harmful behaviors, such as drug use, other addictions, early sexual involvement, and emotional eating.

Many youths who grow up poor remain in poverty as adults, particularly among African Americans.

Many rural African American young people grow up in poverty or in working-poor conditions and experience high levels of racial discrimination.

Remarkably, many of these youths do not show any adverse effects of these experiences, and our research found, prior to our developing SAAF, that this was due to having supportive family relationships that shielded them from the negative aspects of these circumstances.

Dr. Brody's team interviewed more than 1,000 families to identify the parenting practices of the families whose children thrived.

They found that in these communities, parents who applied high levels of parental control and were very involved in their kids' lives had a protective effect.

The researchers then created the SAAF program to teach those practices to parents in the community.

They focused on families with 10- to 14-year-old children.

This is a critical age for heading off unhealthy behaviors that can emerge in adolescence and have potentially lifelong consequences.

The SAAF intervention brings parents and children together in seven weekly two-and-a-half-hour gatherings.

Each week, trained community members moderate discussions and activities with caregivers and children.

Some of the topics are specifically targeted at either the adults or the children.

Other topics and activities pertain to both parents and children.

Young people at this age are moving through puberty and grappling with biological changes that come with it.

At the same time, they're also becoming more autonomous, spending less time with their parents, and modeling more of their behavior after those of their peers.

And if you examine the epidemiologic data, this is a time in life when both conduct problems and depressive symptomology begin to increase.

Dr. Brody and colleagues first implemented the SAAF intervention with 677 families in rural Georgia in 2002, and have been examining its effects ever since.

Our research over the past 16 years on the Strong African American Families Program has shown that supportive parenting can protect young people from the adverse effects of economic hardship and racial discrimination on drug use and their mental health.

Dr. Brody and colleagues' most recent studies suggest that SAAF can even buffer children against the physiological impacts of living with relentless stress.

High-risk SAAF participants had lower levels of stress markers and cellular aging at age 20, as well as evidence of enhanced neurodevelopment.

These results show how a drug use prevention program like the Strong African American Families Program can prevent stress from getting under the skin and into the brain.

We have more work to do to really understand these findings. We're doing that work now, and we're trying to figure out how SAAF impacts the immune system and neural development.

Additional analyses confirmed that the SAAF participants' improved outcomes were mediated by the supportive parenting and strengthened youth protective factors that the program promotes, confirming the program's effectiveness.

Since the first implementation of SAAF in Georgia, the program has also been introduced in numerous other rural and urban communities across the United States.