Cannabis (Marijuana) Research Report
What are marijuana's long-term effects on the brain?

Substantial evidence from animal research and a growing number of studies in humans indicate that marijuana exposure during development can cause long-term or possibly permanent adverse changes in the brain. Rats exposed to THC before birth, soon after birth, or during adolescence show notable problems with specific learning and memory tasks later in life.32–34 Cognitive impairments in adult rats exposed to THC during adolescence are associated with structural and functional changes in the hippocampus.35–37 Studies in rats also show that adolescent exposure to THC is associated with an altered reward system, increasing the likelihood that an animal will self-administer other drugs (e.g., heroin) when given an opportunity (see "Is marijuana a gateway drug?").

Imaging studies of marijuana’s impact on brain structure in humans have shown conflicting results. Some studies suggest regular marijuana use in adolescence is associated with altered connectivity and reduced volume of specific brain regions involved in a broad range of executive functions such as memory, learning, and impulse control compared to people who do not use.38,39 Other studies have not found significant structural differences between the brains of people who do and do not use the drug.40

Several studies, including two large longitudinal studies, suggest that marijuana use can cause functional impairment in cognitive abilities but that the degree and/or duration of the impairment depends on the age when a person began using and how much and how long he or she used.41

Among nearly 4,000 young adults in the Coronary Artery Risk Development in Young Adults study tracked over a 25-year period until mid-adulthood, cumulative lifetime exposure to marijuana was associated with lower scores on a test of verbal memory but did not affect other cognitive abilities such as processing speed or executive function. The effect was sizable and significant even after eliminating those involved with current use and after adjusting for confounding factors such as demographic factors, other drug and alcohol use, and other psychiatric conditions such as depression.42

Some studies have also linked marijuana use to declines in IQ, especially when use starts in adolescence and leads to persistent cannabis use disorder into adulthood. However, not all of the studies on the link between marijuana and IQ have reached the same conclusion, and it is difficult to prove that marijuana causes a decline in IQ when there are multiple factors that can influence the results of such studies, such as genetics, family environment, age of first use, frequency of use, having a cannabis use disorder, duration of use, and duration of the study. Key research in this area to date is described below.

A large longitudinal study in New Zealand found that persistent marijuana use disorder with frequent use starting in adolescence was associated with a loss of an average of 6 or up to 8 IQ points measured in mid-adulthood.43 Those who used marijuana heavily as teenagers and quit using as adults did not recover the lost IQ points. People who only began using marijuana heavily in adulthood did not lose IQ points. Two shorter-duration prospective longitudinal twin studies found that  youth who used marijuana showed significant declines in verbal ability (equivalent to 4 IQ points) and general knowledge between the preteen years (ages 9 to 12, before use) and late adolescence/early adulthood (ages 17 to 20); however those who went on to use marijuana at older ages already had lower scores on these measures at the start of the study, before they started using the drug. Also, no predictable difference was found between twins when one used marijuana and one did not.44

More research will be needed to answer definitively whether marijuana use causes long-term IQ losses and whether factors that weren’t measured in the prior research, such as the increasing amounts of THC in cannabis and the emergence of new cannabis products, are relevant.

Also, the ability to draw definitive conclusions about marijuana’s long-term impact on the human brain from past studies is often limited by the fact that study participants use multiple substances, and there is often limited data about the participants’ health or mental functioning prior to the study. Over the next decade, the National Institutes of Health is funding the Adolescent Brain Cognitive Development (ABCD) study—a major longitudinal study that will track a large sample of young Americans from late childhood (before first use of drugs) to early adulthood. The study will use neuroimaging and other advanced tools to clarify precisely how and to what extent marijuana and other substances, alone and in combination, affect adolescent brain development.

Marijuana, Memory, and the Hippocampus 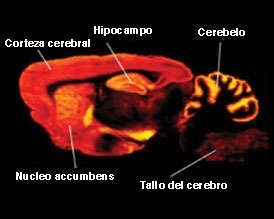 Memory impairment from marijuana use occurs because THC alters how the hippocampus, a brain area responsible for memory formation, processes information. Most of the evidence supporting this assertion comes from animal studies. For example, rats exposed to THC in utero, soon after birth, or during adolescence, show notable problems with specific learning/memory tasks later in life. Moreover, cognitive impairment in adult rats is associated with structural and functional changes in the hippocampus from THC exposure during adolescence.

As people age, they lose neurons in the hippocampus, which decreases their ability to learn new information. Chronic THC exposure may hasten age-related loss of hippocampal neurons. In one study, rats exposed to THC every day for 8 months (approximately 30% of their lifespan) showed a level of nerve cell loss at 11 to 12 months of age that equaled that of unexposed animals twice their age.

NIDA. 2021, April 13. What are marijuana's long-term effects on the brain?. Retrieved from https://nida.nih.gov/publications/research-reports/marijuana/what-are-marijuanas-long-term-effects-brain

NIDA. "What are marijuana's long-term effects on the brain?." National Institute on Drug Abuse, 13 Apr. 2021, https://nida.nih.gov/publications/research-reports/marijuana/what-are-marijuanas-long-term-effects-brain