Methamphetamine misuse raises the risk of contracting or transmitting HIV and hepatitis B and C—not only for individuals who inject the drug but also for noninjecting methamphetamine users. Among people who inject drugs, HIV and other infectious diseases are spread primarily through the re-use or sharing of contaminated syringes, needles, or related paraphernalia. But regardless of how methamphetamine is taken, its strong effects can alter judgment and inhibition and lead people to engage in risky behaviors like unprotected sex.

Methamphetamine misuse may also worsen the progression of HIV disease and its consequences. In animal studies, methamphetamine has been shown to increase viral replication.27 Clinical studies in humans suggest that current methamphetamine users taking highly active antiretroviral therapy (HAART) to treat HIV may be at greater risk of developing AIDS than non-users, possibly because of poor medication adherence.28,29 Methamphetamine users with HIV also have shown greater neuronal injury and cognitive impairment due to HIV, compared with those who do not misuse the drug.30, 31, 32

NIDA-funded research has found that, through substance use disorder treatment, prevention, and community-based outreach programs, drug users can change their HIV risk behaviors. Drug misuse and drug-related risk behaviors, such as needle sharing and risky sexual practices, can be reduced significantly, thus decreasing the risk of exposure to HIV and other infectious diseases. Therefore, drug treatment is HIV prevention. 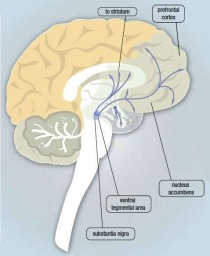 In the brain, dopamine plays an important role in both movement and the reinforcement of rewarding behaviors. As a major chemical messenger in the reward pathway, dopamine is manufactured in nerve cell bodies located within a group of neurons called the ventral tegmental area and is released in the nucleus accumbens, which is a key brain region for learning to repeat pleasurable activities, as well as in the prefrontal cortex, which is responsible for higher cognitive functions like decision-making and self-control. Dopamine’s regulation of motor functions is linked to a separate pathway: Cell bodies in the substantia nigra manufacture and release dopamine into the striatum, which is involved in executing and inhibiting movements and reward-seeking behavior.

NIDA. 2021, April 13. Are people who misuse methamphetamine at risk for contracting HIV/AIDS and hepatitis B and C?. Retrieved from https://nida.nih.gov/publications/research-reports/methamphetamine/are-people-who-misuse-methamphetamine-risk-contracting-hivaids-hepatitis-b-c

NIDA. "Are people who misuse methamphetamine at risk for contracting HIV/AIDS and hepatitis B and C?." National Institute on Drug Abuse, 13 Apr. 2021, https://nida.nih.gov/publications/research-reports/methamphetamine/are-people-who-misuse-methamphetamine-risk-contracting-hivaids-hepatitis-b-c

NIDA. Are people who misuse methamphetamine at risk for contracting HIV/AIDS and hepatitis B and C?. National Institute on Drug Abuse website. https://nida.nih.gov/publications/research-reports/methamphetamine/are-people-who-misuse-methamphetamine-risk-contracting-hivaids-hepatitis-b-c. April 13, 2021