Drugs, Brains, and Behavior: The Science of Addiction
Drugs and the Brain

The human brain is the most complex organ in the body. This three-pound mass of gray and white matter sits at the center of all human activity—you need it to drive a car, to enjoy a meal, to breathe, to create an artistic masterpiece, and to enjoy everyday activities. The brain regulates your body's basic functions, enables you to interpret and respond to everything you experience, and shapes your behavior. In short, your brain is you—everything you think and feel, and who you are.

How does the brain work?

The brain is often likened to an incredibly complex and intricate computer. Instead of electrical circuits on the silicon chips that control our electronic devices, the brain consists of billions of cells, called neurons, which are organized into circuits and networks. Each neuron acts as a switch controlling the flow of information. If a neuron receives enough signals from other neurons that it is connected to, it fires, sending its own signal on to other neurons in the circuit.

The brain is made up of many parts with interconnected circuits that all work together as a team. Different brain circuits are responsible for coordinating and performing specific functions. Networks of neurons send signals back and forth to each other and among different parts of the brain, the spinal cord, and nerves in the rest of the body (the peripheral nervous system).

To send a message, a neuron releases a neurotransmitter into the gap (or synapse) between it and the next cell. The neurotransmitter crosses the synapse and attaches to receptors on the receiving neuron, like a key into a lock. This causes changes in the receiving cell. Other molecules called transporters recycle neurotransmitters (that is, bring them back into the neuron that released them), thereby limiting or shutting off the signal between neurons.

How do drugs work in the brain? 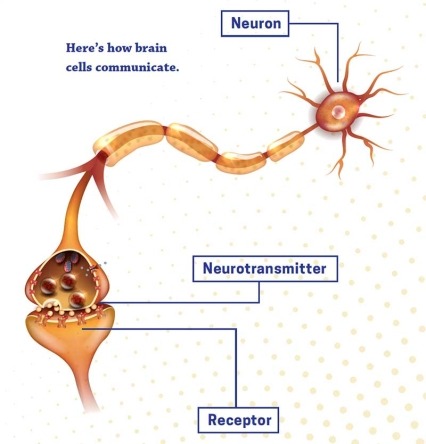 Other drugs, such as amphetamine or cocaine, can cause the neurons to release abnormally large amounts of natural neurotransmitters or prevent the normal recycling of these brain chemicals by interfering with transporters. This too amplifies or disrupts the normal communication between neurons.

What parts of the brain are affected by drug use?

Drugs can alter important brain areas that are necessary for life-sustaining functions and can drive the compulsive drug use that marks addiction. Brain areas affected by drug use include:

Some drugs like opioids also disrupt other parts of the brain, such as the brain stem, which controls basic functions critical to life, including heart rate, breathing, and sleeping. This interference explains why overdoses can cause depressed breathing and death.

How do drugs produce pleasure?

Pleasure or euphoria—the high from drugs—is still poorly understood, but probably involves surges of chemical signaling compounds including the body’s natural opioids (endorphins) and other neurotransmitters in parts of the basal ganglia (the reward circuit). When some drugs are taken, they can cause surges of these neurotransmitters much greater than the smaller bursts naturally produced in association with healthy rewards like eating, hearing or playing music, creative pursuits, or social interaction.

It was once thought that surges of the neurotransmitter dopamine produced by drugs directly caused the euphoria, but scientists now think dopamine has more to do with getting us to repeat pleasurable activities (reinforcement) than with producing pleasure directly.

How does dopamine reinforce drug use?

The feeling of pleasure is how a healthy brain identifies and reinforces beneficial behaviors, such as eating, socializing, and sex. Our brains are wired to increase the odds that we will repeat pleasurable activities. The neurotransmitter dopamine is central to this. Whenever the reward circuit is activated by a healthy,

pleasurable experience, a burst of dopamine signals that something important is happening that needs to be remembered. This dopamine signal causes changes in neural connectivity that make it easier to repeat the activity again and again without thinking about it, leading to the formation of habits.

Just as drugs produce intense euphoria, they also produce much larger surges of dopamine, powerfully reinforcing the connection between consumption of the drug, the resulting pleasure, and all the external cues linked to the experience. Large surges of dopamine “teach” the brain to seek drugs at the expense of other, healthier goals and activities.

Cues in a person’s daily routine or environment that have become linked with drug use because of changes to the reward circuit can trigger uncontrollable cravings whenever the person is exposed to these cues, even if the drug itself is not available. This learned “reflex” can last a long time, even in people who haven’t used drugs in many years. For example, people who have been drug free for a decade can experience cravings when returning to an old neighborhood or house where they used drugs. Like riding a bike, the brain remembers.

Why are drugs more addictive than natural rewards?

For the brain, the difference between normal rewards and drug rewards can be likened to the difference between someone whispering into your ear and someone shouting into a microphone. Just as we turn down the volume on a radio that is too loud, the brain of someone who misuses drugs adjusts by producing fewer neurotransmitters in the reward circuit, or by reducing the number of receptors that can receive signals. As a result, the person's ability to experience pleasure from naturally rewarding (i.e., reinforcing) activities is also reduced.

This is why a person who misuses drugs eventually feels flat, without motivation, lifeless, and/or depressed, and is unable to enjoy things that were previously pleasurable. Now, the person needs to keep taking drugs to experience even a normal level of reward—which only makes the problem worse, like a vicious cycle. Also, the person will often need to take larger amounts of the drug to produce the familiar high—an effect known as tolerance.

NIDA. 2022, March 22. Drugs and the Brain. Retrieved from https://nida.nih.gov/publications/drugs-brains-behavior-science-addiction/drugs-brain